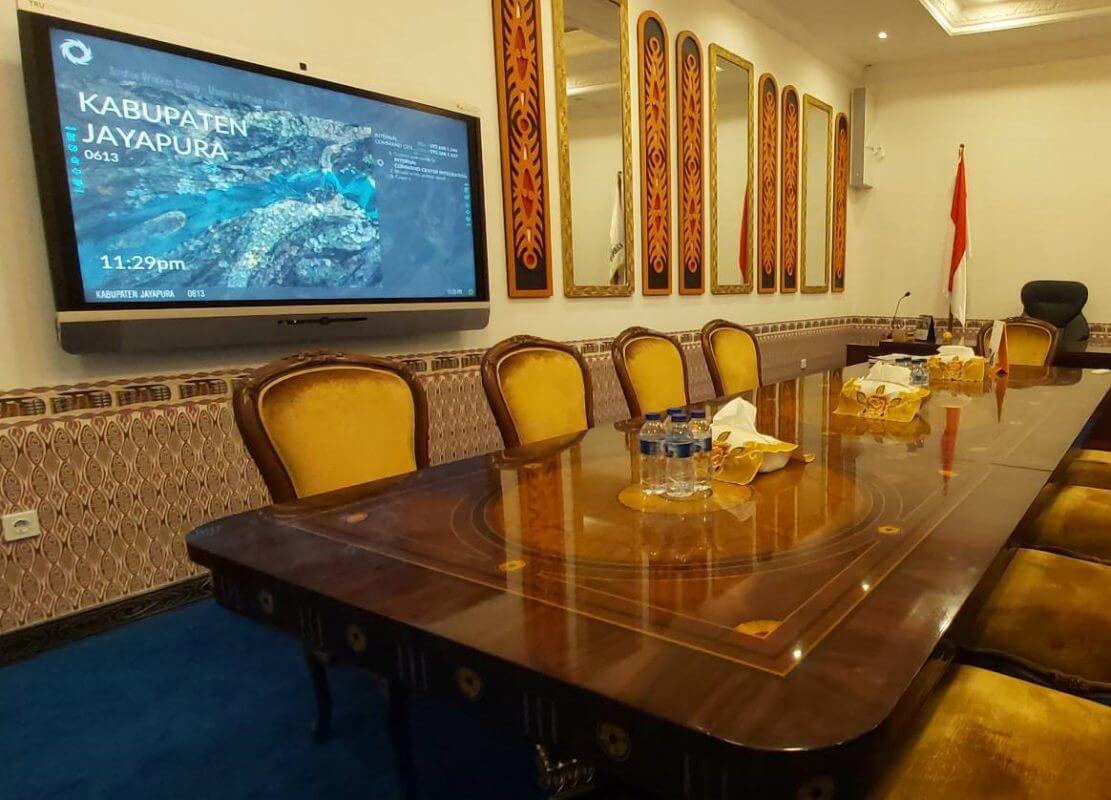 Jayapura Regency is one of the districts in the province of Papua, Indonesia. The administrative center of the district is located in Sentani. The total population of the regency is 125,975.

Jayapura Regent’s Office wanted to renovate the conference and meeting rooms where they could have video conferencing with other Regent’s Offices. The organization was looking for a multi-functional device that would support interactive collaboration and video conferencing, as well as fit perfectly into the meeting rooms design. Additionally, they needed the device to stream contents from the LED video walls in the Command Center.

Jayapura Regent’s Office found the Newline X Series display to be the perfect solution for all of their needs. Instead of installing multiple devices including interactive projector, regular TV screen, whiteboard and PC, they chose the Newline X6, a 65-inch all-in-one interactive display that integrated all the tools needed for collaboration and video conferencing.

The X6 comes with two built-in cameras, a microphone array, and powerful speakers that allow video and voice to be picked up no matter where you are seated in the room.

Employees can also take advantage of Newline’s Interactive Ecosystem software including Newline Cast and Newline Display Management which allow presenters to cast and share content wirelessly and effortlessly, and IT Manager to centrally manage all the displays in the building.

The Newline X Series displays were installed in the Command Centers and Conference Rooms in Jayapura Regent’s Office. With HDMI extenders, the contents can be streamed in real-time from the Command Center videowalls to the Newline X6. With on-screen annotation, the staff can easily write and draw over any content. Intelligent Object Recognition allows users to seamlessly touch, write, and erase content on the board without needing any proprietary tools, only a finger.

The built-in whiteboard is used for daily discussion. With a single touch, users can switch to the built-in OPS PC and work with their familiar Windows system.

“We thought the only way to upgrade a smart conference room was to purchase many expensive and complicated devices such as an IWB, interactive projector, mini PC, good 4K TV and high-end speakers. We didn’t know that a Newline X series Display has it all. We love it!” – Head, IT Facilitator.

Any cookies that may not be particularly necessary for the website to function and is used specifically to collect user personal data via analytics, ads, other embedded contents are termed as non-necessary cookies. It is mandatory to procure user consent prior to running these cookies on your website.